I’m so hungry. Literally, all I can think about is food. And that’s because I can barely have any.

Tomorrow will be two weeks since I got pancreatitis and one thing I learned is that it’s no joke and it’s no fun. I’ve been home from the hospital for 3 days now and my stomach is no better than it was a week ago. There’s a constant feeling of uncomfortableness that hums throughout the day and then after I eat I get sharp stabbing pains. This type of suffering would maybe be worth it if I was eating delicious food… pizza, nachos, mac n cheese…. things of that nature. But instead I’m only allowed to have low fat, fat free and dairy free. Things in the realm of low-fat soups, saltines, fresh fruit, steamed broccoli, grilled chicken.. none of the above are worth a painful aftermath. I’m still not sure how long that regimen will last but I was told that it could be up to a year until I’m fully able to eat everything I once was. Here’s to hoping it doesn’t take that long. I’m a buff chix nachos type of girl and having that taken away really bites the big one.
Although my thoughts are being consumed with “I wish I could eat this” and “Ughhh my stomach hurts so bad,” I also am thinking about what tomorrow will bring. Tomorrow is another big day as I meet with my doctors about where we go from here. Since one of the main chemotherapy drugs that I have been on is what caused the pancreatitis, the risk is too great to continue on with that specific drug. I was scheduled to get ten doses and I had only gotten four so far meaning I won’t get 6 of the scheduled treatments sessions. And not finishing up a session of my treatment plan, well that’s scary. Scary because if that’s what my doctors knew to be the best chance of beating this, what does it mean now that I won’t be getting them all? Hopefully there are alternative drugs and avenues we can take but it definitely makes me nervous to think we’re not going with the strongest option. So tomorrow I’ll once again be at the hands of my doctors.
On a positive note, I’ve been working on a homemade chicken noodle soup all day that I will be having for dinner tonight. The chicken is shredded, the veggies look soft and I used whole wheat egg noodles that look delicious. So cheers to it turning out good and me getting a yummy meal in my tummy.
XOXO,
Jessy
p.s. in honor of being unable to crush food, here’s a pic of me mowing two breakfasts before treatment a few months ago! 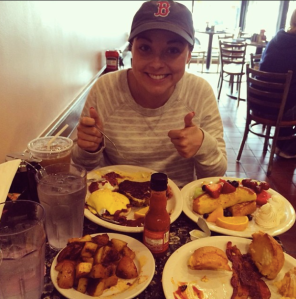