The beauty of love stories is that they’re all different. They all have their own beginnings and middles and ends. Mine didn’t start with love at first sight…not even close in fact. If anything, you could call it ‘boss at first sight.’

When I graduated college, I started working at a medium-sized advertising agency in NH. My first day of work, I was introduced to Mike, the guy I would be directly reporting to. My first impression was serious, bald, gotta be in his late 20’s (which is cool), and nice. A few hours into my day I looked over to his cube which was directly across from mine and chuckled… his feet were up on his desk, hands behind his head and he was chatting away on the phone with a friend about how fun the weekend had been and laughing about how many drinks they had had. Excellent, I thought. I can totes get along with him.

In September, I got to go on my first ‘business trip’ to Stamford, CT. I was thrilled. However, I was feeling like spending 3-4 hours in a car with my boss, alone, could be realllllll awkward. So we got in the car, headed to Stamford and in what felt like 30 minutes, we were there. Not one awkward silence or moment that made me want to throw myself out the window. In fact, I had a blast. We dropped our bags and headed to an amazing tapas restaurant across the street from the hotel to grab a bite to eat. Dinner was pretty much perfection: food was incredible, wine was flowing like water and we didn’t stop talking the whole time. Too much fun at dinner leads to bar hopping until 1:30 am. Wooops. The client meeting the next day was far from enjoyable but through my bloodshot eyes, I was glowing with excitement. I had just had the greatest non-date of my life.

After that trip, our friendship continued to grow and I proceeded to think of as many reasons as possible for why people from work should go out for drinks together. I found myself hating Friday’s and loving Mondays. We began texting all the time, eating lunch together everyday and overall spending far too much time together than two co-workers ever should. After one too many drinks at a charity gala, I found myself making a move and getting denied, hard. Mike was NOT happy with me. Next morning I found myself with a hell of a hangover and a considerable amount of regret. Monday was going to be quite embarassing. Turned out, he couldn’t stay mad at me for long and we were back to chatting and texting all day. For about two months, we talked and hung out constantly but the whole ‘supervisor’ thing was really getting in the way.

And then fate stepped in. Another business trip.

We got told that we had a client meeting on a Monday morning, December 8, 2011 in Stamford. Stamford is only a 40 minute train ride from NYC so I brilliantly decided that we should head there early Sunday morning and spend the day in the big citayyy. A day in NYC all expenses paid? Genuis, I know. So after very little convincing, I met Mike at a Panera Bread parking lot near his house at about 5:30 in the morning and we sped off to Connecticut. Got to Stamford, checked into our hotel, hopped on the train and were in NYC by 11:15am. Not too shabby. By 11:30 we had found our first bar. With that, “super-date” had officially begun. We proceeded to spend the entire day together; eating, drinking, shopping and most importantly — laughing. Finally by the end of the night, and plenty of drinks later, I leaned in for a kiss. I’m not sure where my courage came from but I did it. Unfortunatley for me, I got denied- again. He proceeded to tell me that we couldn’t do that because it was inappropriate. I quickly reminded him, us being in NYC is also probably inappropriate. A little pissed, he went to the bathroom and a few minutes later, strolled out, grabbed my face and the rest is history. (except for the fact that my hair went up in flames at a nice restaurant after our epic first kiss. Not my smoothest moment).

December 7, 2012 rolled around and we were back in NYC celebrating our one year anniversary.

In less than a month, I’m moving into his house and I can’t really believe it. It seems like our NYC “super-date” was just a few weeks ago but it certainly wasn’t. We’ve learned a lot about each other in these past two years, have had countless BDE’s (“best day ever’s”) and most importantly, have become best friends. I never would have guessed on my first day at the ad agency that my serious but seemingly nice boss would become the love of my life. Never, ever, ever. But it happened, and for that, I feel so thankful.

It certainly isn’t a typical ‘love story’ but then again, I wouldn’t want it to be. Because it’s our love story. A little off but a lot amazing. I wouldn’t have it any other way. 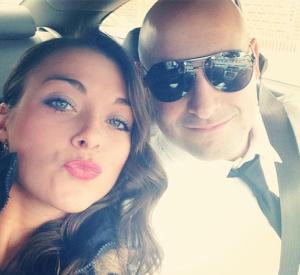