Today might have been a snow day in the office but there’s no such thing when it comes to staying on track of your chemo regimine. So this morning, we bundled up, put on our boots and brazed the snow-laden streets to get over to the Dana Farber. It was a relatively long day as I had to meet with an anesthesiologist for a day-surgery I’m having done on Friday, in addition to getting my normal dose of chemo.

Over the past month, I’ve began losing my hair… again. It’s obviously a lot less drastic than when I originally lost it, but it’s been slowly falling out and I’m starting to stress out. I just can’t imagine having to be bald again (even though #baldisbeautiful. S/O Michael!) Oddly enough, some days are better than others; there are days I barely lose any and others that it falls out each time I run my fingers through my short locks. Today was one of those days. Every morning, I look on pillow to see how much is gone and this morning, there was a bunch. It sucks… flat out. I have been so excited about having hair back. Do I miss my long hair? Absa-freaking-lutely. But I’ll take when I can get and have felt so good about not having to wear head wraps or hats or wigs every time I step out of the house. Plus, being back at work, I want to feel as normal as possible and head wraps are just not normal… reality of the situation. I’m hopeful that it’s just thinning and it won’t be too noticeable but I really don’t know what the future will hold. And that’s enough to overwhelm me each and every time I look in the mirror.
More importantly, in the past few months, I’ve had three close people in my life get diagnosed with cancer; a good friend who is a new mother to the most handsome little boy, my beautiful, hardworking cousin and my loving, funny and beautiful Nanny. This sounds crazy and I know that it’s not how life works, but I almost felt like when I was diagnosed, I must’ve “taken the bullet” for my group of friends and family. But as I learned quickly, that’s just not the case. As I chatted with my cousin this week who is starting to lose her hair, I was catapulted back into the harsh reality of the day I buzzed my head. It was so hard (as I mentioned above, it still is), it was so shocking to see myself in that light… to truly look in the mirror and see a sick person. It’s just so unfair. Why during all these hardships, do patients have to also lose something that defines them so greatly, too? It makes life harder in an already extremely difficult time. But what I’ve also realized while watching these amazing women battle through their own struggles, is where I obtained my own strength. I’ve got a a hell of a lot of tough people in my life, including these three and they inspire me everyday. They’re beautiful and strong and true warrior princesses. Cancer is everywhere, it truly affects everyone in some way or the other and I’ve learned that as cancer survivors (because that’s what we all will be), we need to stick together and find a cure for this terrible, terrible disease.
Cheers to living life to the fullest. Cheers to beating cancer. Cheers to a cure.
XOXO,
Jessy
p.s. throwing it back to my #baldisbeautiful days and to hoping that those days are only a thing of the past. #KissMySass 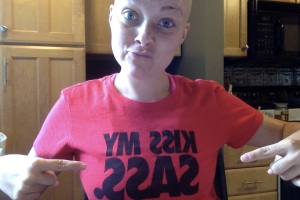